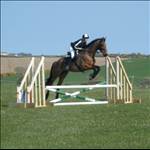 Manx Chasers held the Isle of Man's first ever Eventer Grand Prix at Ballig farm in the north of the Island at the weekend.

The competition, in which horses and riders took on a course against the clock, had three classes, each for different abilities. The height of the fences ranged from one foot, six inches for beginners to three feet, three inches for the more advanced riders.

Each class consisted of a show jumping round of six fences in an arena, immediately followed by a round of eight cross country fences, which consisted of large tree logs, ditches in the ground and handmade, portable wooden obstacles.

After the cross country section was completed the horse and rider combinations had to continue back into the show jumping arena to complete another six show jumping fences. The three different phases were timed as one, and refusals and knock downs at any of the obstacles meant the addition of time penalties to the overall times.

The course was challenging, consisting of tight turns and distances between fences.

In the minimus class the winner was Chloe Chadwick on Rupert Bear in a time of one minute, 54 seconds, closely followed by Abigale Turner-Drewery on Grianagh Vida, four seconds behind.

The Novice class had the most entries and the winner was Danni Callin on her pony Get Jiggy With It, in one minute, 30 seconds, which was the fastest time of the day. Danni was closely followed by Anna Higgins riding her sister's horse Grianagh Kristinn, who clocked one minute, 33 seconds. Third in the novice class was Kate Dawson on Teasle High Flyer.

The open class consisted of new fences to Manx Chasers, which made accuracy very important for all the competitors. The winner was Anna Higgins on Silver Sapphire in one minute, 43 seconds, followed by Clare Drewry on Colour by Numbers, five seconds behind. In third place was Aalish Creer, one of the youngest competitors of the day, riding Oisin Earl of Dreams. Her time was two minutes, seven seconds.

The event was organised by Paul, Hilary and Claire Fletcher who were very pleased with the excellent turn out, and the brilliant sunshine, which added to the day.