NETBALL: Exciting round off to first half of season 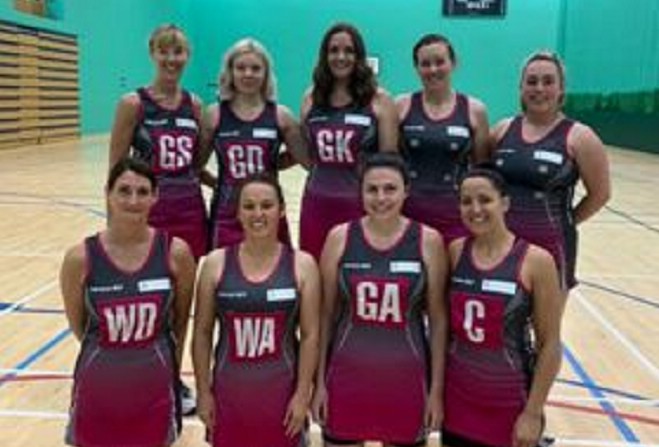 These two were each other’s opening game of the season and what an opener it was. A goal-for-goal fifty minutes that saw Route 1 pull away in the dying minutes of the game by three goals so the re-match was sure to be interesting.

At 9am on Sunday, both teams got off to a slow start, each side throwing away a good scutch of balls with some not-so-careful passing, leading to a low scoreline at the end of the first quarter, where Route 1 lead 6-3.

The leaders were the first ones to kick into gear in the second quarter though, thanks to the coaching tips from Claire Battye. Countless clean defensive tips from the long limbs of C Sara Watterson and GA Nicki Spencer combined with the rash-like man-on marking by Cassie Pizzey meant Route 1 forced numerous turnovers. This combined with Kat Keeling holding under the post, barely missing a shot all game, saw the score soar in Route 1's favour.
This was despite the superb defensive efforts from Missfits WA Dani Murphy who bagged three clean intercepts for her team in the mid-court and GK Lisa Quilliam, whose exquisite movement lead to some textbook intercepts in the circle. Scores on the doors at the end of quarter 2: Route 1 22 Missfits 9.

After a mix around of positions, Missfits came back fighting, putting pedal to the metal. The underdogs managed to hold Route 1 to a one-goal quarter win, thanks to the creation of lovely space through court by GA Becky Dunne, and defensive pressure from Niamh Baggesen-Cox, who stepped in last minute due to another player's injury. At the end of quarter 3, Route 1 continued to lead, 33-19.

With nothing to lose, Missfits decided to mix it up again and not a minute too soon as Route 1 had clocked onto their attacking place down court and amped up the defensive pressure in every third, creating an impressive wall of green. It didn't sway the calm attack from Missfits C Rosie Reay or Lizzie Beard, who moved to WA, showing patience in the face of smothering defence and smooth feeds into the quick hands of GS Lauren Ellison. Dunne moved to GD and immediately made an impact, creating a fantastic battle with shooter Keeling. Solid positioning under the post by Dunne and GK Quilliam, saw Missfits gain a decent scutch of rebounds, which helped them draw the final quarter; a small victory to end the game on.

It was too little too late though, as Route 1 continued to plug away, each player doing their job, and doing it solidly. Confidence oozed out of younger mid-court players Holly Burgess and Cassie Pizzey, whose attacking defence was fantastic from start to finish, showing them play at a level beyond their years. A well deserved win for Route 1 and well deserved player of the match going to the constantly improving Cassie Pizzey.

The netball game between Suntera Global Ballasalla Charlie's and Manx Gems Sapphires started with both teams using the first quarter to settle into their game. The pace of the Manx Gems GA, Alex Wilson-Spratt was a force to be reckoned with for the Balla defence during the first half of the game and whilst Ballasalla were successful in getting some turnover balls to take the lead, the match was otherwise even handed between the teams.

It was the third quarter which saw Ballasalla pull a more convincing lead against Manx Gems as they won that quarter 10-5. Going into the final quarter Manx Gems came out fighting. Their GS was making it look easy and was able to score from anywhere putting increasing pressure on Ballasalla’s defensive duo of GK,Gemma White and GD, Sarah Lister.

With the last 5 minutes of the match remaining, Manx Gems were successful in getting the turnover from Ballasalla’s centre passes and had a flurry of nearly 8 goals unanswered. The pressure was on for Ballasalla to maintain their lead and fortunately for them they were able to hold on, winning the match 34-28. Player of the match was awarded to Diane Cregeen for Manx Gems who was instrumental in defence to break the play down of Ballasalla’s attacking duo of Kath Kermode GS and Amelia Quinn GA.


Manx Gems Emeralds who are sponsored by Island Tyres and exhausts, started with the ball in the first quarter but the play was skilfully turned around by Castletown Celts, Corrin (GS) and Skelly (GA) worked together to score the first goal of the match. Emerald defence of Leece (GK) and Halsall (GD) managed to intercept and turn over some amazing balls feeding them onto Macance (WD). Her and the rest of the team all worked hard to feed the balls down to the attack. At the end of the first quarter, Emeralds lead by 8-3.
Celts came into the second quarter fighting with Duffus (WA), O'Neill (C) and Renshaw(WD) working hard to get the ball down court into their attacking circle. Emeralds, however, went into the third quarter 15-7 up. The Gems shone in this quarter with Baines (WA) and Jones (C) feeding some fantastic balls to the attacking circle. Kelly (GA) and Fitzgerald (GS) continued to increase the Emeralds lead and between them pushed the score to 22-8 at the end of the quarter.

The final quarter was a stronger one for the Celts as the defensive duo of (GD) Charmer and (GK) Brooks-Lund, were working extremely hard to turn over the balls and feed their attack, where their shooters were then capitalising on this. Celts doubled their score in the final quarter, but the final score was 26-16 to Emeralds with Halsall again, receiving a well earned player of the match after some incredible play