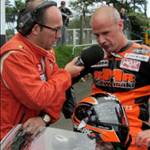 Ryan Farquhar has dominated from start to finish to take the 500cc Classic Manx Grand Prix.

The Northern Irishman finished more than five minutes ahead of Chris Swallow to take his 10th Manx Grand Prix success.

But the drama came at the finish line where Castletown man Chris Palmer, who was lying in second place, ran out of fuel but managed to push in from Governor’s Bridge and just sealed third spot.

Farquhar was thrilled as he became the second most successful MGP competitor behind Bob Heath on the all-time winners list.