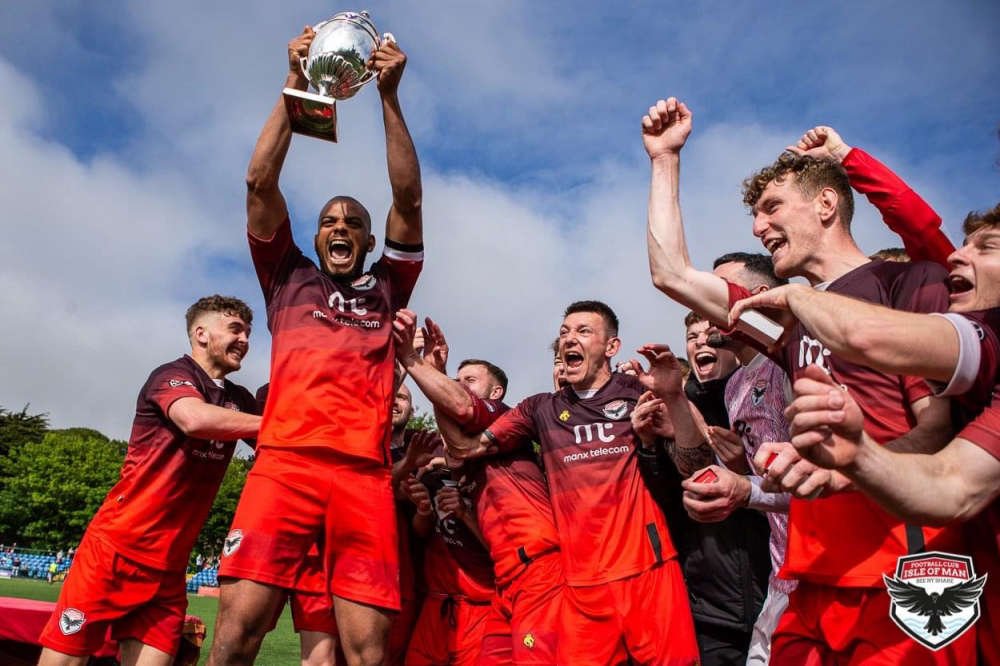 Ravens secure silverware to round off extraordinary first ever season

FC Isle of Man secured cup glory in the final game of their exhilarating first ever season after beating Cammell Laird 1-0 at The Bowl to win the First Division Challenge Cup this afternoon (21 May).

The Ravens went into the season finale on the back of eight straight wins, whilst their opponents, a Cammell Laird, were contesting their third cup final of their campaign.

’Lairds’ came close within 90 seconds of the game starting as Cameron McGregor’s low effort was saved by the left foot of FC IOM goalkeeper, Dean Kearns - from the resulting corner Lairds defender, Daniel Stephens rose unmarked in the box but could only put his header straight at Kearns.

After sustaining early pressure, The Ravens thought they had the lead with 13 minutes gone - Some clever footwork from Furo Davies on the left edge of the Cammell Laird penalty area saw Davies reach the byline and fizz a pass across goal, but Ravens striker, Luca Moretta’s close-range strike was deflected agonisingly wide of the post.

Four minutes later and another chance for the Manx side as Lee Gale’s clipped cross from the right found Jacob Crook between the defenders six yards out, but he could only send his diving header over the crossbar of Lairds ‘stopper, Nathan Davidson.

After this, both sides took turns to dominate the ball in the opposition’s half, but neither Kearns or Davidson were to truly be tested further in the first period as the game remained goalless come half-time.

The second period started much the way the first had finished, with both teams enjoying spells on the ball without creating many clear cut opportunities.

With 71 minutes gone, Cammell Laird nearly took the lead in spectacular fashion - FC IOM half-cleared their lines from a corner to Lairds midfielder, Ryan Smith 25 yards out who hit a thunderous half-volley which smashed against Kearns’ crossbar.

After more increasing pressure from ‘The Shipyarders’, FC Isle of Man then managed to get the decisive goal in the game with eleven minutes of normal time to play.

Ravens substitute, Chris Bass jnr. whipped in a corner from the left and from five yards out, Jacob Crook got a crucial headed touch to drive the ball into the Cammell Laird net, sending the 3,000-strong crowd into raptures.

Despite a late push in the last ten minutes of the game from the visitors to claw their way back into the game, the Ravens held strong to take the 1-0 victory - triggering wild post-match celebrations from the FC IOM squad who received a standing ovation from the crowd as they secured their first ever cup trophy in the last game of their maiden campaign.

FC Isle of Man will return for the 2022/23 campaign when they will compete in the NWCFL Premier Division, with fixtures to be announced in due course.

Man of the Match: Jacob Crook (FC Isle of Man)