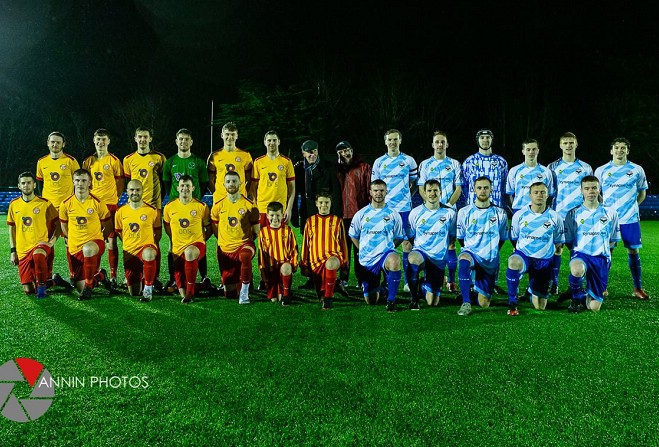 Crowds braved the wet and windy conditions last night to watch some of the Island's cream-of-the-crop footballers go head-to-head at The Bowl in Douglas.

Isle of Man FA's national team met new club FC IOM for, what turned out to be, a fantastically exciting match, all in aid of the Craig Heartstrong Foundation.

FA were the ones to go ahead first, with Sean Doyle scoring the opening goal of the game 8 minutes in.

It was levelled at 40 minutes with a sensational goal from Chris Bass Junior who spotted FA keeper Nathan Teare off his line and sent the ball high from 35 yards, which dropped perfectly into the net.

Half time scores saw each club with one point a piece.

IOM FA were the first ones again to score in the second half; Ciaran McNulty taking the national side ahead 2-1.

But that was where the goals ended for FA; the same cannot be said for FC IOM.

In the 69th minute, Stephen Whitley levelled the game 2-2; and it wasn't long before more goals for FC IOM followed in quick succession.

Two goals in two minutes soon followed; the first by Cardy, who took FC IOM ahead, and Ste Whitley in the last 9 minutes of the match.

Despite a very central free kick right on the edge of the box, the national side couldn't change the score.

Full time saw the Ravens win 4-2, in a game full to the brim with commitment and entertainment from both sides.