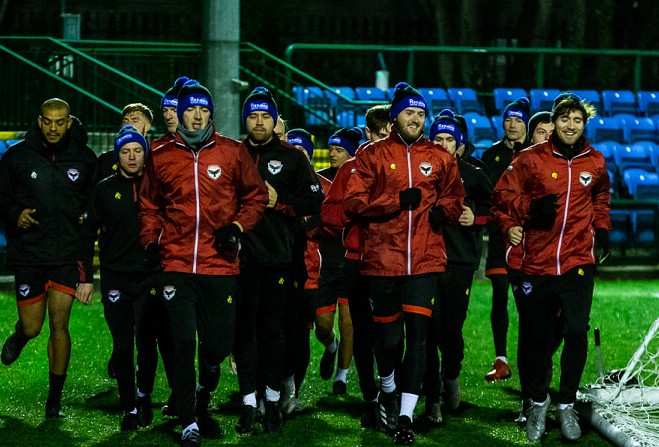 Ravens aiming to stay in play-offs going into Xmas break

FC Isle of Man will face off against fellow league play-off contenders Sandbach United in their final game of 2021 this weekend.

The Ravens will be looking to improve on their last outing which saw them held to a frustrating 2-2 draw at Rocester last Saturday (11 December) with late penalty denying the Island side all three points.

They remain inside the play-off positions in the NWCFL Div 1 South table in fifth position.

They're six points clear of next closest Cheadle Town in the position below.

The Manx outfit are unbeaten in their last eight games, with six wins and two draws from those.

The last time FC IoM and Sandbach United met was back on the 9 November at the Sandbach Community Football Centre.

There, the Island side came out on top in an entertaining 4-2 contest.

Meanwhile, Sandbach United will be hoping to claw back ground on the 10-point gap between themselves and the Ravens tomorrow evening.

The Cheshire-based club have one win from their last four league outings, however their last league game saw them secure a 1-1 draw against undefeated league leaders West Didsbury & Chorlton.

FC Isle of Man vs Sandbach United will get underway at The Bowl in Douglas on Saturday, 18 December at 5.30pm.

Manx Radio will be providing full live commentary of the game on the AM1368 and Digital platforms.