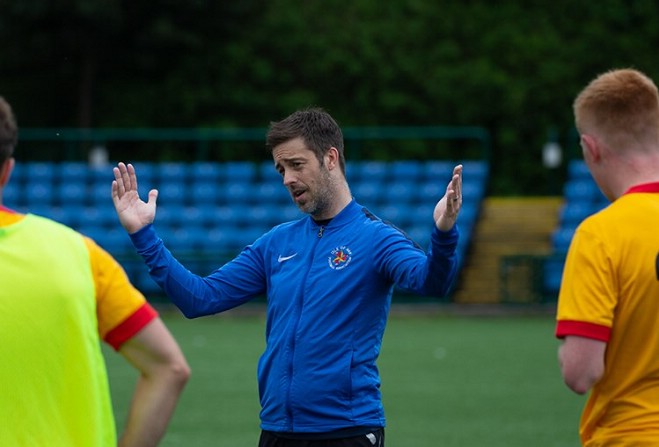 Paul Jones is one of the driving forces behind FC Isle of Man (photo credit: Gary Weightman (Vannin Photos))

One of the key figures behind the proposal to form a new, Island-based football club says the idea was first conceived more than a decade ago.

It was announced this week that FC Isle of Man has had discussions with the North West Counties Football League regarding the application process, as it aims to enter the English non-league system.

Preliminary talks have also taken place with the Isle of Man FA in relation to the affiliation of the club, which would determine where home matches would be played.

Paul Jones, who is also the manager of the Isle of Man FA senior men's side, has been speaking to Manx Radio Sport about how the plans would affect the domestic game.

A number of individuals are said to be involved in the project which would see a squad of players travel to the UK to contest games on a regular basis, as well as welcoming visiting teams to the Isle of Man.

Question marks still surround the funding of the proposed set-up, as well as how it would impact on the current structure in place.

How will it be funded?

The number of competitions that FC Isle of Man enter would be a factor in how expensive the club would be to run.

Travel costs for both getting the Manx squad off the Island and visiting teams to The Bowl would have to be incurred by the club, due to location.

Pitch hire, training facilities, and kit costs would also have to be accounted for should the project get the backing of the 26 clubs under the Isle of Man FA umbrella.

Jones believes with everything considered, funding to the tune of between £200,000 and £300,000 would be needed each season to be successful.

Sustainability remains one of the biggest concerns hovering over the plans, but Jones says the business model that's being worked on would be "to generate a surplus over and above their operating expenses."

Those behind FC IOM want it to be a community-owned club which can also generate money through sponsorship.

How will it affect the current set-up?

At present, there are two divisions in the Isle of Man for first teams: the Canada Life Premier League and JCK Ltd Division Two.

The players who would compete for the new venture would most likely come from the 26 clubs that make up those two tiers, which some believe would level the playing field.

Anyone who does represent FC Isle of Man may be able to obtain dual-registration which would allow a player to compete for an Isle of Man FA club as well as travel with the proposed set-up.

However, as FC Isle of Man is still not formed, Paul Jones conceded that the focus at the moment very much remains on the off-field issues.

A working group with the Isle of Man FA is the preferred route for the proposed Step Six outfit, according to Jones, but details on the playing side of things need to be ironed out.

Will the project get the green light?

Having first been thought of 12 years ago, this is the closest the Isle of Man has ever been to forming a club that would be able to compete in the English non-league system.

An eight-week process is now underway before the 26 Isle of Man FA members - including champions St Mary's, St George's and Peel - have a vote on whether or not to support the project.

It's believed by some that football as a whole on the Island is in decline and, so they may view this as a great way to encourage more players to take up the sport.

Others may see FC Isle of Man as an unsustainable, unattainable idea that will ultimately fail, despite the best efforts and intentions of those behind it.

It's understood the Isle of Man FA has so far been helpful in assisting the venture, but affiliation is one detail that needs sorting.

Essentially, that would tag the new club onto a particular region where it could play its home games.

With The Bowl in Douglas already deemed a suitable facility, it is assumed there will be no issue in that venue being used.

Government departments, stakeholders and other community members are also being consulted as process progresses.

The vote on whether member clubs back FC Isle of Man's affiliation to the Isle of Man FA is due to take place on 8 October.