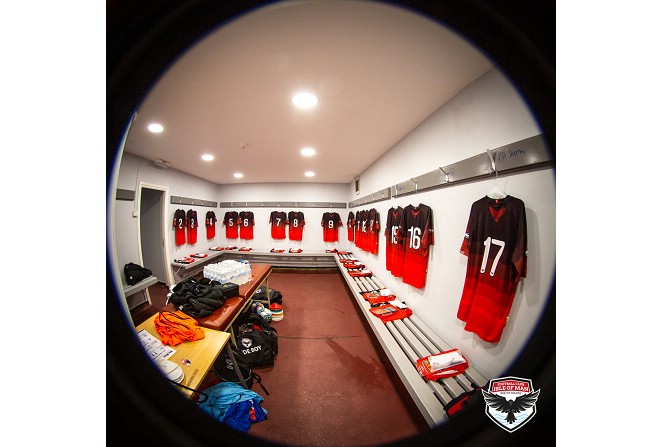 The Ravens were aiming to continue their perfect start to 2022 against a Cheadle Town side who’d beaten them earlier in the season.

From the first minute both sides approached with plenty of intensity and desire going forward.

In some hotly-contested opening exchanges, FC Isle of Man took the lead with six minutes gone when Charlie Higgins was on the end of a Ste Whitley cross from the right and Higgins calmly guided a looping header into the bottom left corner from around 12 yards out.

Despite getting in front, the Ravens had to sustain some heavy pressure from a lively Cheadle Town side who got level in strange circumstances on the stroke of half time.

Cheadle striker Patrick Davin latched onto a through ball through the centre which the linesman called as offside, however his raised flag was missed by referee Thomas Le Prez, and as almost everyone stopped waiting for play to be halted, Davin strode into the area and squared for teammate Ryan Usher who stroked home from around six yards.

Le Prez then, following deliberation with his assistant, confirmed the equaliser for the visitors.

With the game balanced at 1-1 at half time, a breathless second period got underway.

The Ravens restored their lead on 54 minutes when Michael Williams rose highest to power a header low into the net from a Lee Gale cross from the left after Cheadle Town had failed to fully clear a corner.

The Manx side then made it 3-1 on 68 minutes when substitute Luke Murray got onto a loose ball in the penalty area from a long cross before swivelling on the spot 15 yards out and smashing a half volley past Cheadle Town ‘keeper, Marcus Burgess.

But the visitors, who’d shown plenty of threat up to this point, got themselves back in the contest with just six minutes left.

Ravens ‘keeper, Dean Kearns, spilled a free kick from the left to the feet of Nathan Bibby for Cheadle who rifled home a low drive from close range to make it 3-2.

Any nerves in the stands were then calmed when Sean Doyle got FC IoM’s fourth on 86 minutes after a terrible back pass wrong footed Burgess in the Cheadle goal, and his miscontrol was pounced on by Doyle to lift into a gaping goal from close range.

With the Ravens closing in on three points, they rounded off a thrilling evening in style through Dan Simpson.

Simpson, deep into second half stoppage time, received a quick pass from a free kick out right before cutting inside from 25 yards and unleashing an unstoppable drive into Burgess’ bottom left corner to make it 5-2.

Man of the Match: Charlie Higgins (FC Isle of Man)