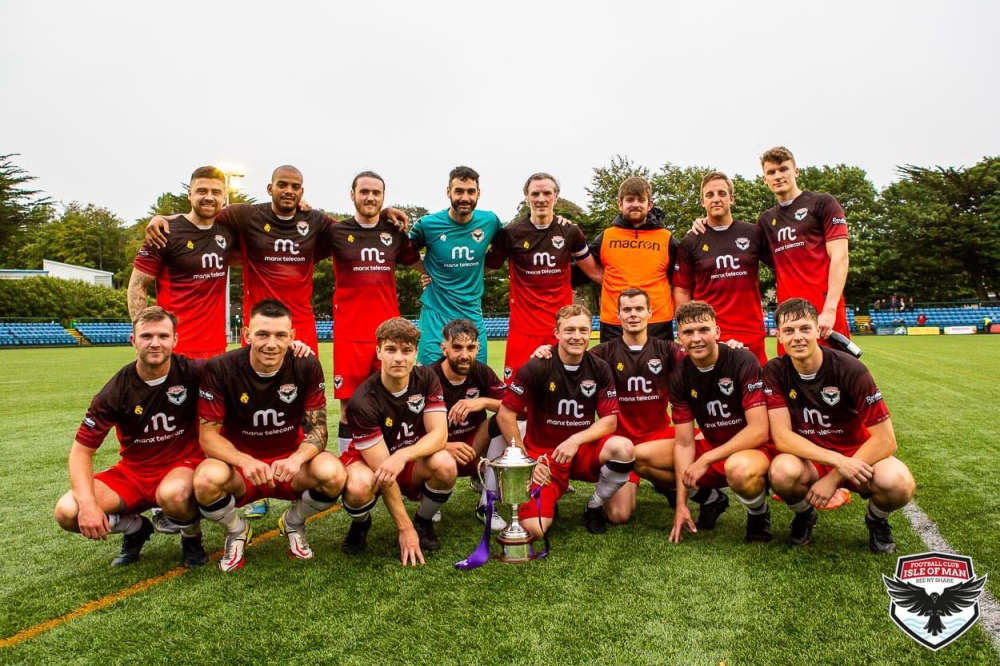 FC Isle of Man secured silverware in their final game of pre-season this evening (23 July) after beating Guernsey 2-0 to win the Skipton Cup.

The two sides met at The Bowl on Saturday evening, playing each other for the trophy for the first time since September 2020, when Guernsey were victorious at Footes Lane Stadium.

The Manx side pressed from the front straight from the start, not allowing ‘The Green Lions’ to settle on the ball.

The first big chance fell the way of the hosts on 18 minutes when FC IoM’s Lee Gale put in a low cross from the right into the Guernsey six-yard box which was deflected over outstretched Guernsey goalkeeper, Josh Addison, and a last-ditch goal-line clearance from Guernsey’s Thomas Dodds stopped the ball rolling into an open net.

On the stroke of half-time, the home side made the breakthrough when Gale fizzed in a corner from the left which Addison came to punch and missed, allowing Sean Quaye to head into the net from close range.

Leading 1-0 at the break, FC IoM started the second period the stronger, and Quaye nearly scored a second on 58 minutes, but his header from another corner clipped the top of the crossbar.

Meanwhile, Guernsey, still looking to patiently build from the back, found rare opportunities to take the play up the other end of the pitch, however Kearns in the FC IOM net remained largely untested.

Just under 70 minutes in, the Ravens then doubled their lead when a swift counterattack on the left saw Jacob Crook swing a low cross into the Guernsey box, and whilst Ravens striker Luke Murray was unable to connect with a shot at the near post, the ball rolled behind into the path of Gale who slammed home from around 12 yards into the top-right corner.

Crook then nearly added a third for the hosts with twelve minutes remaining, but his strike from the left of the Guernsey box came crashing back off the crossbar.

The scoreline was to remain at 2-0 come the final whistle, allowing FC Isle of Man to lift the Skipton Cup for the first time and secure victory in their final game of their pre-season schedule.

FC Isle of Man’s next match will be their first of their new league season in the NWCFL Premier Division against Lower Breck at The Bowl on Saturday, 30 July.