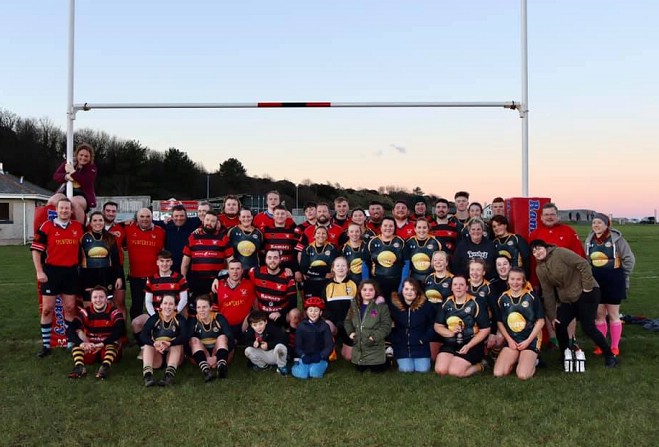 Money to be split between HBC & Motor Neurone Disease

More than £2000 has been raised for two local charities thanks to multiple exciting match-ups in the local rugby world.

The Boxing Day festive rugby all went ahead as planned despite the attentions of Storm Bella and a tidy sum was raised for charity in the process.

Kyle Martin ran in a hat trick for the Captains side, Jim Emmett crossed twice and there was also a try from Connor Coulthard with two conversions each for Messers Emmett and Martin.

Amid allegations of cheating and general unsportsmanlike conduct the Presidents XV ran in five tries.

Alex Gibson picked up two, with one each for Jack Goodwin, Chris Horton and Peter Martin with Harry Goodwin converting one.

The game raised £100 each for Hospice IOM and the Encephalitis Society, which Castletown promote via their team shirts.

At the Field of Dreams, Southern Nomads split into under and over thirty with the youngsters coming out on top 36-29.

Josh Smith did all the damage for the Unders with a personal four try tally.

At Ballafletcher, the Young Farmers claimed a 56-12 (ish) win in the Paul Cleland Memorial game against Vagabonds.

Conor Goodall, Callum Clague, Aaron Curphey and Brandon Atchison all crossed for the Farmers in the first half building up a 26-7 half time lead. Atchison also scored for Vagabonds in the first half, due to this being his Paul Clelland debut and having to play for both teams as a result.

In the second half, Vagas hit back with a try from Colin Crooks who was also making his Paul Clelland debut at the tender age of 47 after a long lay off from rugby. The Farmers added to their total though with a further Atchison score, plus tries from Liam Kirkpatrick and Matty Meechan who was drafted in for his cow-handling skills.

After the game, Jim Nicholson got down to the serious stuff and his efforts yielded £1032.59 from the clubhouse crowd and this was generously topped up with 41p by Manx Rugby to give a round £1033.

Jim then found two anonymous benefactors. Firstly, one gent who decided to make the total up to £1500, and a second gent, who then rounded funds up to £2000.

Both gentlemen have asked that they remain anonymous.

Still to add were funds from the final game of the festive season.

Hosted by the Plough Hotel in Ramsey, crowds flocked to watch Vagabonds Ladies go head-to-head against Jim Nicholson XV, in which Vagas lead until the final ten minutes in the game.

Tries from Isla Curphey, Lauren Ellison and Jo McCabe, plus a penalty try gave the Ladies a 24-15 half time lead, with Jake Richmond, Orry Watterson and Aaron Curphey replying for the Nicholson XV to keep them in touch.

Dan Richmond pulled one back for the men early in the second half but youngster Archie Callaghan touched down for the Ladies to restore their lead.

Richmond then completed his hat trick and a drop-kicked conversion put the Nicholson XV a point in front at 32-31 with just seven minutes to play.

However, the final minutes were one-way traffic with Jared May, Keith Littleworth and Paul Howard all touching down to make the game safe.

The after-match fundraising generated £721, which, added to the other fundraising match on Boxing Day between Vagabonds and Young Farmers, saw £2721 raised.

Money raised will be split equally between Motor Neurone Disease and the Hyperbaric Chamber.