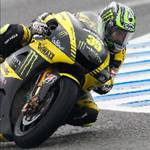 Cal Crutchlow became the first British rider to get on a MotoGP podium in 12 years after finishing third in the bwin Grand Prix of Czech Republic in Brno at on Sunday.

In a great weekend for the Isle of Man–based Midlander he signed a new deal for his Monster Tech 3 Yamaha team and then secured his first MotoGP podium after qualifying in second place for the 22-lap race round the 3.357-mile circuit.

The last British rider to finish on the rostrum was Ulsterman Jeremy McWilliams, who was third in the 2000 British Grand Prix at Donington Park.