Four in a week for Cav; Kennaugh shows quality 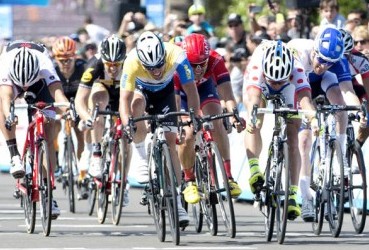 Mark Cavendish claimed the final stage of the Tour of California on Sunday (May 17th).

His fourth stage success of the week, the Manx Missile won the sprint from Los Angeles to Pasadena with overall winner Peter Sagan coming home in third place.

Sagan was three seconds ahead of the Manxman’s team-mate Julian Alaphilippe who forewent his own chances to help Cavendish win a fourth stage.

Cavendish also retained the sprinters points competition he won last year – in the end he finished 13 points ahead of Sagan.

Peter Kennaugh finished in a fine ninth place overall – he was 52nd on the final stage.

Cavendish next heads to the Tour of Suisse before racing at the British National Championships in Lincoln.

He said ‘I'm super proud of what we’ve done here and think things are going in the right direction ahead of the Tour de France.’