Fourth and seventh for Crutchlow and Rea 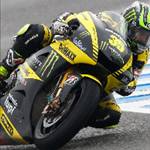 There was a fourth place and a seventh place finish for the two Island residents competing in the Spanish MotoGP.

Cal Crutchlow finished outside of the podium places in fourth behind Yamaha team-mate Andrea Dovizioso.

Dani Pedrosa kept his faint hopes of a first MotoGP championship alive with a dominant win from pole-sitter Jorge Lorenzo.