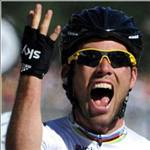 Mark Cavendish has made history at the Tour de France.

The Manxman is now the most successful sprinter at Le Tour in terms of stage wins after taking victory on today's final run into Paris, his 23rd overall at the world's most prestigious cycling race.

It's the fourth year in a row he's won on the Champs Elysees, which in itself is an unprecedented achievement, as is a victory on this stage by the incumbent world champion.

He's now one ahead of sprinter André Darrigade in the all-time Tour de France stage victory list, and is also one clear of seven-time general classification winner Lance Armstrong.

Cav is now fourth in his own right on the list, eleven behind the man who heads it, Eddy Merckx.

Here are the last few moments of the stage, as described by ITV4: