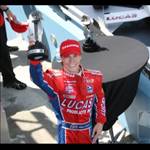 Alex Lloyd has given himself a great chance to claim a fourth consecutive victory in the Indy Pro Series.

He will start the latest round on the front row with Ken Losch, who is in pole position.

Alex will have to battle not only his rivals but history itself, as the first on the grid has always gone on to win the Freedom 100, held at the Indianapolis Motor Speedway.

If he is victorious he will become the first driver ever to win the opening four races in the series.

The action gets underway at 4pm Eastern Daylight Time, which is 9pm in the Isle of Man.