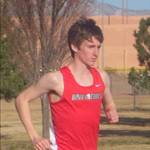 Gerrard represented the Aviva Great Britain team in a three-way match against a European Select team containing four athletes who finished in the top six in last month's European Championships, and a USA team that included five sub-29-minute 10km runners.

With nine runners in each team, and just the first six in each to score, the 8km senior men’s race was set to be a small but very competitive elite field.

The Manx athlete ran in the leading group in the early stages of the race and was prominent on the second lap as the GB team packed together well, however as the strong European team gained momentum he had to battle to keep his position for the final two laps.

Keith, who was the fifth Briton home, said after the race, "I was pleased to be a scorer for the team, it was a solid run and good start to the year, I know there is more to come.

"I had a slight setback in November, but my training went very well over Christmas in the Isle of Man."

The first British athletes to cross the line were fifth-placed Frank Tickner in a time of 25 minutes 55 seconds with Steve Vernon seventh in 26 minutes.

The team match was won by Europe with 44 points followed by Great Britain with 58.

The USA, who despite fielding a quality team, found the traditional style cross-country course at Holyrood Park a tough challenge and finished third with 76 points.

The Manx Sports Aid / Martin Bullock Manxsport-sponsored athlete heads off to Albuquerque this week for altitude training with his coach and USA training partners, returning next month for the English National Cross-Country Championships.