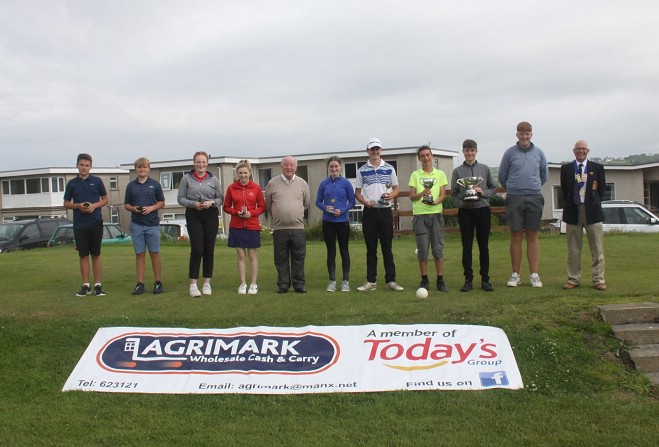 The event looked in doubt as officials turned up at the course with Mannannan's Cloak reducing visibility at the course, however visibility improved and the first shot was played by defending champion Freddie Dancox playing with Connor Cain and Matthew Bell.

The players handled the conditions well with Freddie returning a highly credible two over par 72 despite a double bogey on the easy 17th hole. Second best score of the morning went to Sam Crawford of Castletown with a 74 including a triple and double bogey to sit second behind Dancox.

The second round the players went out in score order so it was Crawford and Dancox drawn together and they had a good ding dong battle over the Rowany course with players matching birdies including 2’s on the tricky 13th. Sam returned a one under par 69 in the afternoon for a total of 143 which under normal circumstances would win the title but Freddie was inspired, playing his best golf of the year for a second round of 2 over par 68 and a level par total of 140 for the championship.

If these boys maintain these standards going on to the men's championships at Mount Murray they would be expected to qualify for the match play stages as first time qualifiers.

In the girl’s event last year’s runner up Emma Noon of Douglas Golf Club added the under 18 Champion to her list of titles previously being the under 16 Champion in the past.

Emma is a great supporter of Isle of Man Golf and has reduced her handicap index to 4.7. She works hard at her game and will be looking forward to the championship and will be pushing for an Island Games place for 2023.

In the under 16’s Championship for both boys and girls it was a Saunders victory with brother and sister Anthony and Shannon Saunders taking the titles on the day.

In the under 14 boys the winner was Jarod Sterbik from host club Rowany using his local course knowledge to the full breaking his handicap as well as securing the title.

Thanks go to Rowany Golf Club for providing the venue for this year’s championship for Peter and Maria for looking after all the players and supporters and the green keeping staff for the work done to present the course in fantastic condition.

These events could not be put on without the help of volunteers and we are grateful to Vicky Noon and Shirley Strathdee for giving up their time to make the event a success.

It is hoped that an event for under 7, under 9 and under 11’s can be arranged in September to cover those children that have started lessons at the various clubs on the island and a further announcement will be made when details are available.