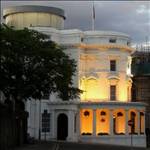 The Isle of Man general election features on the Guardian's website today (Thursday).

The headline in the 'Northern Blog' reads '16-year-old voters have their say in Manx general election - a nudge for reformers in the UK Government'.

Describing Douglas as 'Bright lights, cheerful place, and plenty of young voters to help keep it that way', the article goes on to state that 'government continues to flourish in the first part of Europe to extend the franchise'.

It's claimed time was when members of the Keys clung on to devices such as birching, but the extended suffrage is a much better way to involve potential hoodies and hoodlums in civic life.

The article also says that, with the Island being so small, direct democracy is practicable, with Manx Radio being able to give five minutes air time to each candidate.

(Picture: The legislative buildings in Douglas).