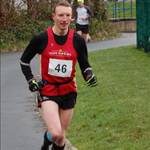 The Manx athlete finished the course in the north of the Island in a time of two hours, 41 minutes and 46 seconds.

That was nearly a minute ahead of Graham Hedger with Paul Davies third.

A record 334 athletes competed in the half marathon and visitors dominated.

The race was won by Ewan Brown from Robert Affleck and Kevin Deakes.

Caroline Mayers was the first woman finisher ahead of Sarah Webster, Jane Grace and Rosy Craine.