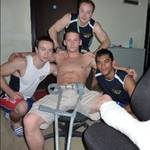 After a week which has seen the Isle of Man gymnastics squad lose two members through serious injury, it was down to business for the remaining trio on Monday.

When Joe Smith was forced to withdraw early last week, the Isle of Man men's gymnastic team knew they would have a tough task with the three remaining gymnasts under real pressure to perform.

Against teams of five, Alex Hedges, Adam Hedges and Mukunda Measuria exceeded their original pre-games target – a tremendous performance in the circumstances.

On top of that, the team event selects the finalists in each separate apparatus individual final and for the individual all-round event.

Having made the individual all-round final as a reserve in Melbourne, Alex was determined to get through again in this, his final Commonwealth Games before he retires from the sport.

The top 24 individuals in the team event qualify for the final, and Alex was delighted to finish 21st.

"I had a really solid day – no mistakes and I've done what I needed to do. Now it's back in the gym on Tuesday to prepare for the final on Wednesday."

Mukunda had a faultless day – everyone agreed he had really stepped-up to the mark, and he was rewarded with a reserve spot in the final alongside Alex.

If two of the 24 qualified gymnasts pull out (apparently quite common), then he will join Alex in the final on Wednesday.

"I'm not really thinking about that. It's just a great relief to get today over. I felt the pressure on the first piece of apparatus, but once you get going you start to relax.

"At one point I missed a move on the pommel, and I was gymnastically ad-libbing from that point, but I got through. I'll find out tomorrow if I'm in the final."

Adam was enthusiastic about his biggest ever competition.
"It was great to be part of such a close-knit team. We all shook hands with Joe at the start, and he told us to 'do it for the team'. I missed a couple of landings, but didn't let it affect me. It is great to have achieved what we set out to as a team."

Although he was sidelined, Joe kept his promise to be the loudest supporter in the gym.

"It was tough to watch, but I wanted to be here. I was really happy to see the boys excel on such a big stage."

Prior to travelling to Delhi, the squad had worked out a points target of 210 - achievable if everyone performed to their best ability. On the day, with only three gymnasts, they managed 213.5.

Gymnastics manager, Haresh Measuria reflected on the culmination of a difficult seven days,

"That's a really solid finish to a traumatic week. I'm really pleased to have beaten our target. Once we lost Joe, we knew it was going to be very tough.

"The plan was to be 'clean and cautious', to maintain routines and to ensure dismounts were solid. To have attained 213.5 with the bare minimum team is a very satisfying result."