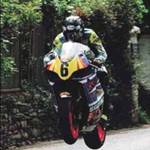 He will compete for his Motodynamics Race Team on a Triumph 675 in the production class and a Suzuki S.V. 650 at a meeting in his native New Zealand.

Harris intends to fit in three more races before the end of the year and has entered five rounds of the New Zealand Superbike Championship between January and March.

The Kiwi was seriously injured in the 2007 Superstock T.T. when he came off at Union Mills on the last lap suffering major fractures.

Months of treatment followed at Nobles Hospital and in Leeds before he could return home.

Since recovering, Harris has been working out in the gym, rowing and cycling in order to regain full fitness.

He recently passed a medical and has received his Motorcycling New Zealand licence to compete again in the country.

The golden year at the T.T. for Shaun Harris was 2003 when he won both production races.