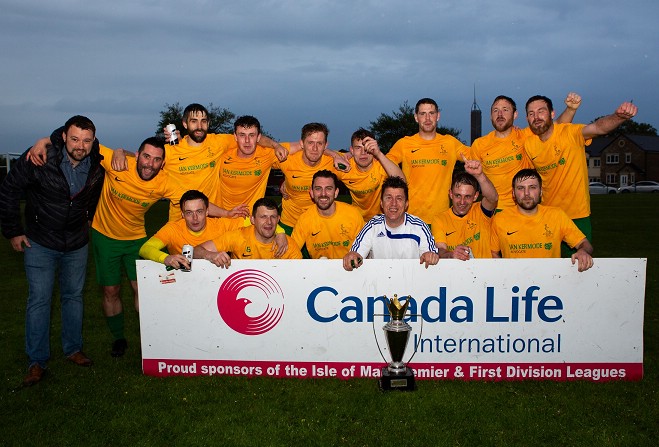 St Marys have been crowned champions for the first time in 16 years, after they secured an emphatic away victory at Douglas Athletic.

The star of the show on Tuesday night was Darren Hudgeon, though, who notched the first of his four-goal haul just moments later.

He scored again mid-way through the first half as the Saints put the champagne on ice, before skipper Frank Jones made it 4-0 at the interval.

Jones netted almost immediately after the re-start and they showed no signs of letting up as Hudgeon sealed his hat-trick.

A fortuitous deflection off McVey made it 7-0, but there was nothing lucky about the scoreline as Marys were dominant in every department at Springfield Road.

Hudgeon was on target either side of substitute Jordan Crawley's brace late on as St Marys romped to a 10-0 win and their first Premier League title since 2003.

Last season, St Marys lost 6-0 at Douglas Athletic in what many regard as one of the lowest points in the club's history.

Off-field matters and poor performances had led to talk of the club folding, as they went on to register a seventh-place finish.

Eighteen months later, however, and the Bowl outfit delivered a champions' performance in the same fixture to take an unassailable lead at the top of the Canada Life Premier League in some style.

Speaking after the match, Harrison and Jones told Manx Radio Sport the success marks an incredible turnaround in fortunes, which saw Marys come back from the brink after almost collapsing last season: