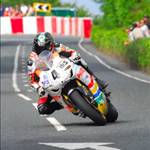 Ian Hutchinson's done it yet again at TT 2010, winning this afternoon's Superstock race to claim a hat-trick of victories.

In what was a simply stunning, topsy-turvy race, things were looking good for Ryan Farquhar on the first couple of circuits, especially when he set a new lap record of 129.816mph on the second one.

A slower pit stop than Hutchinson meant Farquhar dropped behind the in-form Yorkshireman as they went out for the third lap, but he'd managed to regain the lead by Glen Helen.

It looked like he would hold on, but a record-breaking final lap by Hutchy saw him snatch victory by just 1.3 seconds.