Higgins in line for sixth title 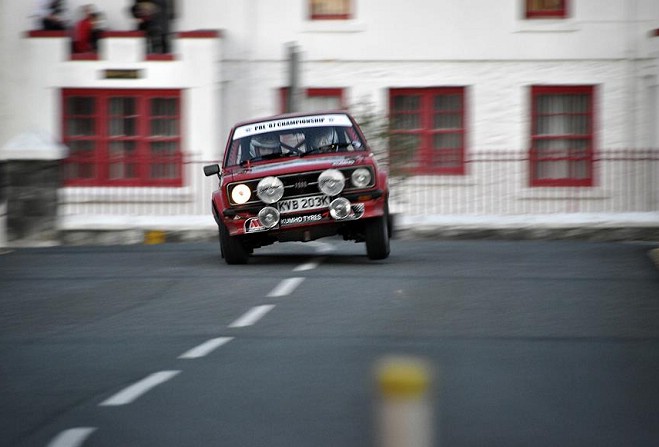 Manxman Mark Higgins bid for a sixth 138.com Rally Isle of Man title lives on into the final day of this years event, after he snatched an unlikely lead at the end of Friday.

Higgins and co-driver Darren Garrod have struggled throughout the event with a lack of top end speed from the gearbox of their DMack Ford Fiesta R5, but overhauled Tom Cave's similar car mid-morning and then really attacked the stages that gave them the best chance of keeping rally long leader Elfyn Evans in sight, especially SS7 Ravensdale and SS8 Snuff the Wind.

It paid dividends when the new British rally champion Evans and Craig Parry suffered driveshaft failure on SS12 Sloc 2 late on Friday evening, forceing them to tackle the concluding SS13 Dollagh in rear wheel drive, conceding 47.6s to Higgins and with it the lead of the event.

The time loss could have been worse but organisers cancelled SS14 Ravensdale 2 due to delays earlier in the evening.

The gap is 17.5s and with tomorrow's six tests to complete the event slightly favouring the Welshman, we could be set for a true Grandstand finish.

Tom Cave (Fiesta R5) retains third position, looking at taking second in the MSA British Rally Championship behind Evans.
His cause was helped when Swede Fredrik Ahlin retired his Fiesta R5 on SS7, and David Bogie (Skoda Fabia R5) dropped a minute with an off road excusrion on the final stage of the day.

Irish driver Desi Henry has his Skoda up to fourth just 10s behind Cave and only 44.6s off the lead. Rhys Yates (Fiesta) has deiven a strong rally to hold fifth and BRC2 champion Matt Edwards (Fiesta) is sixth.

Overall Pritchard leads Paul's brother Ryan Barrett by 30.1s, after he dropped time on SS6 Pond Road with coil problems, costing them 40s road penalties too. Will Onions is 16s further back after stuggling with gear selctor problems. All are in MkII Ford Escort's.

Guy Woodcock was the principle Classicagh retirement of the day, sidelined with mechanical issues on SS7.

Meirion Evans/Iestyn Williams (Ford Escort) continue to lead the National category, though they were overhauled briefly by locals Andrew Leece/Graham Fargher until they barrel-rolled their Mitsubishi Evo 8 into retirement at the end of SS5 Phildraw.

All to play for then on today's six stages of a thrilling 138.com Rally Isle of Man that reaches its conclusion late afternoon with the famous Classic stage that finishes at the TT Grandstand start line at around 4pm.