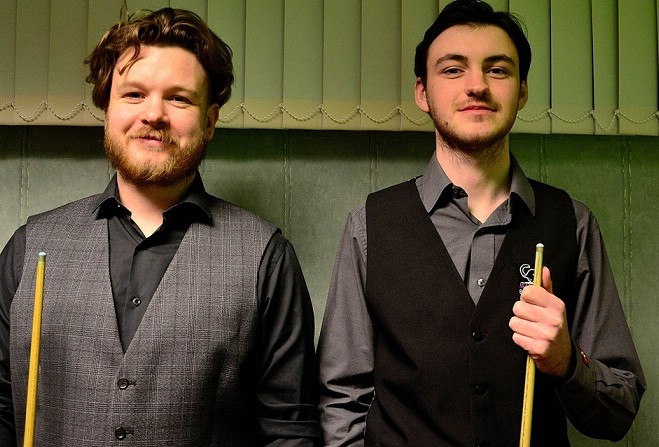 Darryl Hill and Dollin Mercer emerged victorious from a nailbiting final of the Isle of Man Snooker Pairs Championship 2017/18.

They defeated Paul Smyth and Sean Corkish at Peel Legion last night (Thu 25), after both teams worked their way through the biggest entry the tournament has seen for some years without losing a frame.

The format was a best of five frames, where players play each of their opponents separately, plus a 'doubles' frame in the middle.

A repeat of the Champion of Champions final, Hill was looking for revenge in the first frame against Sean Corkish - and revenge he would get.

Paul Smyth soon made amends though - he potted well and took his chances to beat Dollin Mercer 70 points to 32, levelling the scores at 1-1.

The doubles frame was largely a cagey affair, but Hill and Mercer scored steadily and did enough to restore their lead, taking the third frame 78 points to 29.

This gave Hill, who has got to the final of the pairs twice before but never won the competition, an opportunity to wrap the tie up against Paul Smyth - but it was not to be.

Some excellent safety play and crucial pots meant Smyth led by 21 points with 22 remaining on the table, before a safety exchange on the brown ended when Smyth potted a table-length double.

A few visits later he then potted the blue for a 75-45 win, his second individual victory of the night, levelling the tie at 2-2.

This meant Corkish and Mercer were left a one-frame shootout for the title - neither player started well, with several straight forward pots missed and pressure clearly mounting.

A couple of important visits saw Mercer pull ahead, and he looked favourite to win the frame until, on a break of 16, a heavy contact meant he jawed a red in the middle pocket.

Corkish was therefore 45 points behind, with four reds left on the table.

He produced the best break of the tournament under extreme pressure, potting the remaining four reds with colours plus yellow, green, brown and blue to reach 51 - this meant he was six points ahead and just needed the pink to win the competition.

With the pink on the brown spot and the cue ball near the middle pocket, Corkish was visibly uncomfortable with the shot and readjusted his stance several times - eventually rattling the pink in the jaws of the top pocket and leaving Mercer a chance.

Mercer potted the thin pink, sending the cueball down the table towards the black, but landed high on it leaving a tricky pot.

Having looked at several safety options, Mercer opted for the pot and cut the black into the bottom corner, taking frame and match - much to the delight of partner Hill and coach Paddy Delaney.

The Isle of Man Billiards and Snooker Association extended its thanks to Don Humphries and Steve Cowin, who prepared the venue and refereed the fixture diligently.