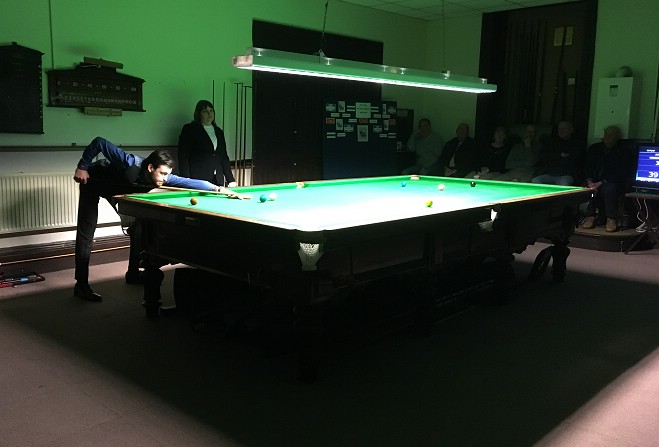 But it was not all plain sailing for the 22-year-old, in a closely fought match against reigning champion John Kennish, who was competing in his fourth consecutive Island Championship final.

However Kennish took control thereafter, winning a scrappy second frame 70-53, before cruising to a third frame victory with a break of 52 leaving him 32 points ahead with 27 remaining, forcing a concession from Hill.

The Isle of Man Billiards and Snooker Association provided a buffet for the players, officials, and around 40 spectators at the interval, before play resumed.

And the interval appeared to come at the right time for Hill, who by his own admission was very out of sorts for the opening four frames - it was to be a turning point, as he won the fifth frame 59-16 with a break of 39.

The sixth frame then followed for Hill, after a dramatic finish left the scoreline at 52-52, meaning there was to be a respotted black.

Kennish won the toss and put Hill in to play first - he left the black on the green cushion, and Kennish mishit his reply leaving Hill a straight black into a bottom pocket. 3-3.

Some bits of misfortune and uncharacteristic missed pots started to creep into Kennish's game, and Hill capitalised in frame seven with a break of 31 on the way to a 60-9 frame win, to leave him one frame from victory.

The eighth frame was again scrappy, with no breaks of note, but Hill potted an exceptional long blue under pressure to seal frame and match - 60-34 in the final frame, taking the scoreline to 5-3.

For the first time in the history of Manx snooker, the match was refereed by a woman - Jane Hill took charge of proceedings.

Semi-finalist Tom Miller finished with this year's high break, with his 110 in the group stages remaining the best in the event.

The final was followed by the end of season presentation for all of this year's events.