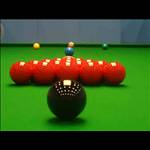 He was the only player to make the final stages of both competitions.

On Saturday in the under-16's, where Daryl was by far the youngest player, he lost 3-2 against Callum Downing who is five years older. The highest break of the tournament was 128.

On Sunday, boosted by his performance in the higher age bracket, the player from Santon made it to the quester-finals thanks to a confident 3-1 victory.

In the last 8, Daryl lined up against British Star of the Future Champion Adam Bobat. The match attracted a very large audience. A tight affair resulted with a deciding frame required with the score at 2-2.

Daryl dominated the decider but was to lose in the cruellest of manners. Going to the colours, Daryl was ahead as he lined up the blue to take the match with Bobat needing a snooker.

The blue was potted but the cue ball kissed the pink to go in off. Adam Bobart went on to take the game on the black, and then qualified for June's Final with a 5-0 demolition job in the semis.

Daryl's next big challenge will be the Doug Kinrade Memorial Final against Graham Stanton on Thursday 26th March. He has already qualified for the last sixteen of the Isle of Man Senior Championship.