Hockey: Team of the Week (Round 2) 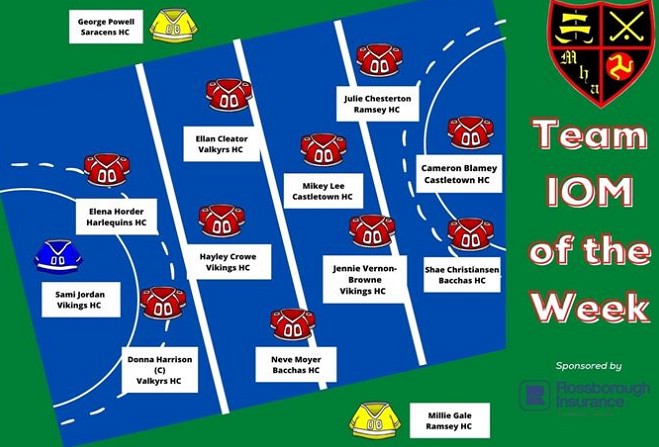 Nominations pour in for all seven clubs

The second round of hockey's Team of the Week has been released and again has players from all seven clubs on the Island.

Thirty players (nine of which were nominated from direct opposition), three umpires highly thought of, and loads of nomination stories were sent in.

🟢 Millie Gale (Ramsey HC) stepped our fresh faced for her senior umpiring debut this Saturday and did a superb job. She then stepped in to her out her U16 team and umpired back to back fixtures! Committed to her sport 100% and the games couldn't have gone on without her!

⚫️ Sami Jordan (Vikings HC) had 3 nominations all saying the same thing... she had a BRILLIANT game on Saturday and reports from her opposition were she was really confident when challenging the forwards in her D. Well done, and welcome back Sami! 🙌🏻

🔵 Donna Harrison (Valkyrs HC) aka. Captain fantastic led by example this weekend making some important (and awesome) tackles. All the attacking play came as a result of her distribution from the back. She plays simple but effective hockey who is a long served captain at Valkyrs who deserves a medal 🏅

🟡Elena Horder (Harlequins HC) had a storming game and made many crucial tackles, marked her opposing forwards out the game and kept her head up in a tough fixture! 🤘🏻

⚫️Hayley Crowe (Vikings HC) was welcomed back into her team after a break from hockey and played fantastic. Making a lot of crucial tackles, distribution like you wouldn't believe and was a strong voice from the back- directing play, supporting and encouraging her team! 💪🏻

🔵 Ellan Cleator (Valkyrs HC) is fierce competition. She was nominated by her opposition on the weekend and described as terrifying to come up against. She crushed it all over the pitch, proving her utility skills. One heck of a player! 🌪

⚪️ Neve Moyer (Bacchas HC) is a reasonably new to the game but had a turning point in her hockey career on the weekend. With only a handful of full pitch games under her belt, she took a huge step out of her comfort zone and charged head first towards the challenge. She got stuck into her fixture and worked really hard. Well done Neve! 🌟

🔴 Mikey Lee (Castletown HC) is an inspiring player who proves despite your own limitations you are always in control of the effort you can exert (and he gives everything). Proven by him having to be carried to his car after a game! Due to returning players, he has taken on a more advanced role in his team and is still achieving great things. 🔥

⚫️ Jennie Vernon-Browne (Vikings HC) was nominated by her opposition this week for being a pleasure to play against. Smiling the whole time, running hard and creating a lot of positive attacking play. She is wicked fast and often skipped around 3 or 4 players with ease. A charming midfield assassin! ☺️

🟢 Julie Chesterton (Ramsey HC) was a hat trick hero this weekend, exactly what you want from a forward! 🙌🏻

🔴Cameron Blamey (Castletown HC) made huge chances for his team this weekend and had a notable performance causing the Bacchas defence a headache or 2 throughout the game! We had 3 separate texts saying how good he was, how could we not include him this week? 🤷🏻‍♂️

⚪️Shae Christiansen (Bacchas HC) had his best game for the club on Saturday, playing extremely selflessly for the whole 70 minutes and even managed to get himself a hat trick. Always in the right place at right time and all on his return from injury. 🤙🏻