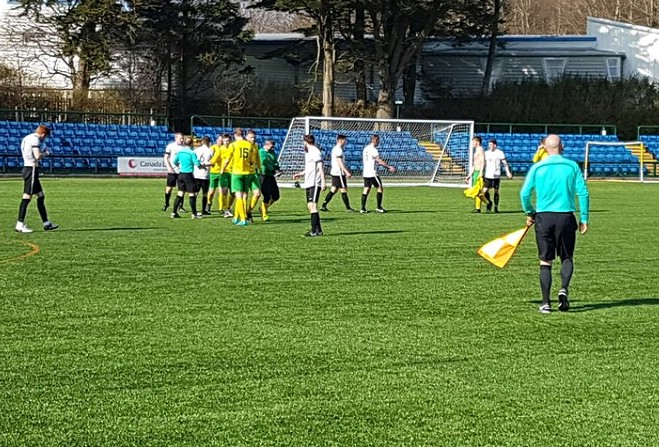 The top three in the Canada Life Premier League all made it through to the semi-finals of the Keystone Law Hospital Cup this afternoon.

Ste Whitley was the hero for Corinthians, bagging a brace as the Whites beat St Mary's 2-0 at the Bowl.

Cup holders St George's eased to a 9-1 win at St John's, thanks to a hat-trick from captain Frank Jones, doubles from strikers Ciaran McNulty and Furo Davies, and strikes from Chris Bass Jr and Sam Caine.

Rushen United were given a scare by second-tier Malew, trailing 1-0 and 2-1, before going on to edge their fellow southerners 3-2.

Jamie Johnstone hit two, with Josh Kelly grabbing what turned out to be the winner.

In the last of the quarter-finals, Douglas Athletic beat Marown after 3-1 on penalties, after the match had finished 4-4 after extra time.

Will Penhallurick, Mikey Callister, Lewis Daly (from the penalty spot), and Darren Shields scored for Douglas Athletic, while Andrew O'Neill, Connor Gilbert and Kev Druggan were on target for Marown in normal time, with Stewart Morris scoring for them in extra time.

In the semi-finals, Rushen will play Corinthians and St George's will take on Douglas Athletic.

Both matches will be played at Ballafletcher next Saturday, kicking off at the same time.

In the Canada Life Premier League, meanwhile, Peel finished a difficult week on a positive note.

They bounced back from heavy defeats against St George's and St John's to thrash Colby 8-0.

Lee Gale scored half of the total, with Sean Kelly (two), Andrew Crennell and Daniel Bell also getting on the scoresheet.

Old Boys fought back from 1-0 down at half-time against Laxey to win 3-1, with Chris Coxon (two) and Callum Stewart scoring for them.

Braddan edged Ramsey 3-2 in the battle of the bottom two, with Andy Glover (two) and Stewart pacey scoring.

The combination of those results has relegated Colby.

In JCK Division Two, meanwhile, a sole Connor Garrett strike was enough for Castletown to see off Pulrose and extend their lead at the top to five points.