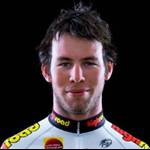 Manx cyclist Mark Cavendish has recorded one of the biggest wins of his career so far.

This afternoon he won stage four of the Giro d'Italia.

After the Tour de France, it's one of the most important stage races in the world.

The final leg was held in Sicily and Cav won in a sprint finish featuring some of the world's top riders.

The Giro will finish on June 1.