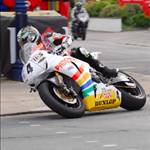 Ian Hutchinson has won the Supersport race for the second time in three years in dramatic circumstances.

Again it was at the expense of Bruce Anstey, who ran out of fuel and pulled over at Brandywell on the final lap.

In 2007 it was Anstey's mechanical problems which helped Hutchinson grab his first victory on the Mountain Course.

Guy Martin, who finished second, had set the early pace, grabbing a new Supersport record of 125.375mph on the first lap.

But the Flying Kiwi Anstey truly lived up to his nickname on the second circuit as he obliterated Martin's mark, pushing the record up to 126.549mph and becoming the first man to take a 600 bike around in under 18 minutes.

But disaster struck for him as he looked to be home and dry and Hutchinson took full advantage to win in a new race record time: