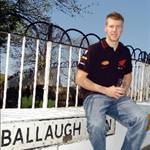 There was a 15 minute delay to the start of the first timed practice session of TT 2010, but conditions were ideal when the riders got away.

Ian Hutchinson put in the fastest solo lap of Monday evening's session, going round the mountain circuit at an average speed of 128.3mph.

He was understandably pleased when Chris Kinley spoke to him straight afterwards (play audio file):

Meanwhile, the sidecar benchmark was set by Austrian Klaus Klaffenbock and his Manx passenger Dan Sayle, the pair going round at an average speed of 111.76mph.

The sidecar session was marred by a crash involving Keith Walters and passenger Alun Thomas.

There's another practice for the solos and sidecars this evening.

As with yesterday, the Mountain Road closes at 5pm, with the rest of the circuit shutting an hour later.