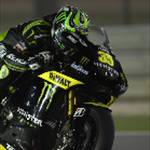 Cal Crutchlow finished sixth in the British MotoGP at Silverstone this lunchtime.

That was despite the Ramsey resident riding with a broken ankle, and starting from the back of the grid after missing qualifying.

Speaking to the BBC afterwards, Crutchlow said he was emotionally drained after a testing weekend, but paid tribute to the medical staff and the crowd.