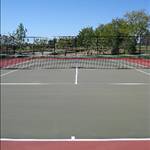 The PokerStars Isle of Man Open Tennis Tournament got under way over the Easter weekend.

In the Men's Singles, Stewart Swann defeated Rob Henney from the UK 6/4, 6/0 to progress to the next round where he met the number one seed Martyn Bailey.

In the next round he played number three seed Jack Hedges in a thrilling match that went all the way to a very competitive Champions tie-break which Jack won 10-8, winning the match 2/6, 6/3, [10-8].

But in the next round he came up against his coach Ian Watson, the number two seed, who dispatched his young rival 6/0, 6/0.

In the Ladies Singles Eleana Snidal beat Sarah Breed 6/0, 6/1 and then played the number one seed Katie Tinkler, who progressed to the final winning 6/1, 7/5.

In the other half of the draw the second semi-final was played between Hannah Snidal and Lucy Hamilton-Turner, Lucy running out the winner 6/2, 6/0.

The Ladies Doubles competition also got under way in a round robin format.

Lucy Hamilton-Turner and Elena Snidal paired up and have made a good start, winning all three of their matches.

Katie Tinkler and Hannah Snidal won one match and lost to Lucy and Elena.

Kerry Beattie and Frances McDonnell also played two matches, winning one and losing one to Lucy and Elena.

Also playing were sisters Catherine and Sarah Breed who lost both their matches and mother-and-daughter pair Mejeaan and Justine Torry who lost their match.

The Mens Doubles competition starts on Tuesday with further play scheduled in the other events.