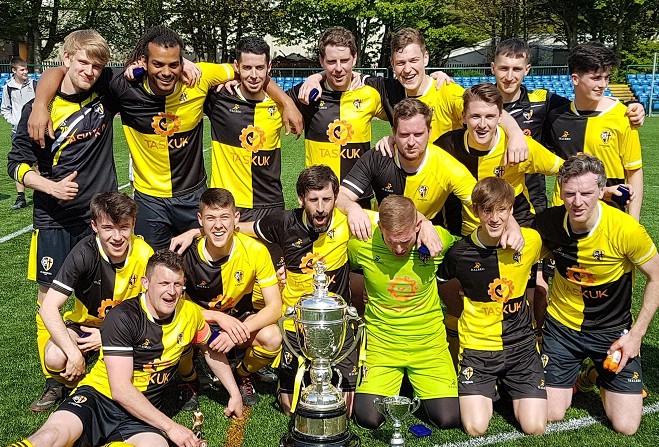 The 30-year-old had a hand in three goals as the domestic champions secured a second trophy of the season with a 4-3 win over Corinthians.

It was the black and yellow of St George's who led early on after they capitalised on a slip from Whites defender Cameron Lee.

Jay Skelcher-Maxwell burst into the box and squared for Ciaran McNulty to tap home.

A fiery encounter ensued, but it appeared Corinthians were gaining the upper hand as the half went on.

They went close three times, with Ste Whitley, Sean Doyle and Luke Murray all spurning decent chances before the break.

In the second period, it was St George's who came out the blocks quicker, and they soon doubled their lead through captain Frank Jones.

Jones will be wanting to claim the third goal  of the game which came soon after the St George's second.

Brodie Patience pulled one back for Corinthians, but a below par defensive display was exploited once again as Jones then completed his hat-trick.

Whites captain Sean Doyle was next on the scoresheet as he halved the deficit, before a Tom Callister strike ensured a nervy finish.

But St George's held firm to lift the trophy and continue their dominance of the Manx game.