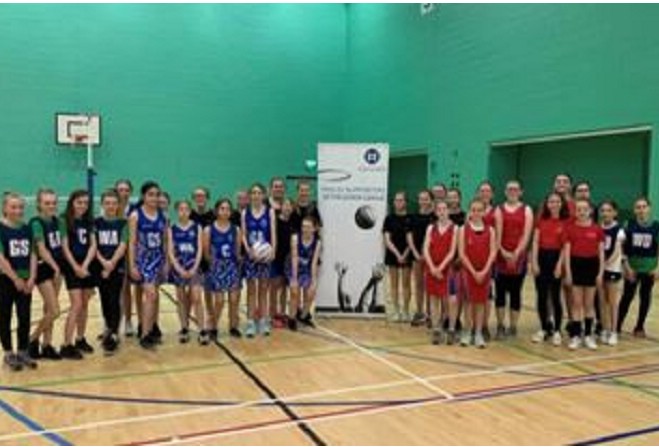 U14's: One goal win for Balla against Castletown

Both teams came out fighting, with the ball moving up and down court however, Ballasalla's taller defence meant that it was difficult to feed the ball into the Thompson attacking circle.

Ballasalla managed to get 4 goals to Thompson’s one in the first quarter, the score would have been higher for Ballasalla if they had managed to score from each of their attempts at goal. The second quarter was more energised for both sides with both sets of shooters getting their shots in. Balla’s shooting duo of Ihona Bridges and Kirsty McConnell were on a roll.

Thompson made more changes in quarter 3 however, this didn’t have the desired effect and they only managed to score 3 goals to Ballasalla’s 5. A pep talk at quarter time from both team’s coaches fired them up again. Thompson changed the shooting combination to Leah and Izzy, giving Zahara a well-earned quarter off. With plenty of dodging and movement from the shooters, coupled with accurate shots meant that Thompson were able to rack up the goals. A strong centre court resulted in the ball flowing quickly, and a tight defence reduced Ballasallas’ chances to shoot.

Ballasalla worked hard for the win and it was well warranted, both teams deserve credit for not giving up and fighting until the end. Pulling off some outstanding shots Zahara Hewlett received a well-deserved player of the match for Thompson, whilst Ballasalla’s Centre, Annelise Mellor showed great skill in being the link between attack and defence and getting the ball where it needed to be.

With Castletown Rockets immediately intercepting Suntera Ballasalla’s first centre pass, they were able to take an early lead. The Ballasalla defence of Elsa Fair and Natalie Howland had other ideas though, and quickly kicked into gear denying them any further goals. Ballasalla were able to level the game by the end of the first quarter.

Summer Craig and Libby Moore battled hard in the centre third but nothing was getting past Ballasalla’s Elsa Fair who created lots of opportunities for her team. The determination of Lily Gell at Goal Attack meant that Ballasalla were able to capitalise on these defensive efforts. Eleanor Wheeler was taking the ball well near Castletown’s post but equally confident moves from Ballasalla Shooter, Jessica Pretorius, gave Ballasalla a three-goal lead heading into the final quarter.

Castletown came out fighting from their team talk. Summer Craig was making plenty of interceptions and Sydnie Kelly made a positive impact in their shooting circle.  Castletown were catching up but the Ballasalla side was able to do just enough to hold them off, winning the game by only one goal (10-9).

Ramsey dominated this game from the start, demonstrating that they were a much more experienced team than the Gems team they were up against.
The Ramsey shooters scored consistently but the Crystal's circle defensive duo of Kirree Corkish and Farrah Iqbal- Corkill didn't make life easy for them. They fought consistently for tips and interceptions and never stopped trying which is a real credit to them in this type of game.

In mid-court, Eve Hall at centre for Gems and Ashleigh Scheuder at WA linked up well with Amy Corran at GA. The Ramsey midcourt picked off interceptions and turned the ball over well with their WD Winnie Davies in the middle of all the action.

Although the Gems didn't see much of the ball in their attacking circle there has to be a special mention for the long bomb scored by GS Lily Mulchrone in the last minutes of the game, what a goal! A positive end for the Gems after a tough game against a quality Ramsey side.

The Under 14, Division 3 Tournament got under way at the NSC, with great enthusiasm and sportsmanship from all the teams entered.

It was such a pleasure to see these young girls take to the court and showcase their skills. They were a credit to themselves, their coaches and their clubs!