Kennaugh continues to Shine in Italy 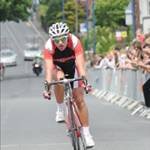 Manx cyclist Peter Kennaugh is still in contention for honours at the Giro Ciclistico d'Italia.

Riding for Great Britain, he finished in 38th place on stage five of the event, affectionately known as the "Baby Giro".

It means he is fifth in the General Classification a minute-and-a-half behind the leader.

Kennaugh is still wearing the King of the Mountains jersey and is third in the Points Race.