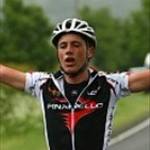 Young Manx cycling star Peter Kennaugh finished third in the Girobio, or "Baby Giro", after a puncture 15km from the finish blew his chances of victory in Italy.

He started the final stage around the roads of the Eroica sportive second overall, just 11 seconds behind Italy's Manuele Caddeo.

But it was Colombia's Cayento Sarimento who snatched the overall win, after nine days of intense racing, from both Catteo and Kennaugh by a handful of seconds.

The 20-year-old can still reflect on a highly successful tour, with a stage victory, a lead of the king of the mountains classification at one point and a strong challenge for the points jersey earlier in the week.

Meanwhile Kennaugh's fellow Manxman and Team GB rider Mark Christian finished but was outside the maximum time limit set by the organisers.