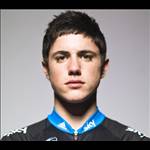 Manx cyclist Peter Kennaugh has made a promising debut for Team Sky.

He helped get team-mate Steve Cummings into the final sprint and fourth place at the Marseillaise event in France .

Peter eventually finished 11 seconds behind the leading six with all the other Sky riders - his final classification was 85th place.

Meanwhile, brother Tim kennaugh and Chris Whorrall finished in 11th place after the final night of the UIV cup held in conjunction the the pro six day event in Berlin.