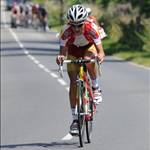 Tim Kennaugh won round three of the 2009 Isle of Man Cycling Road Race Series, the Roy Killey Memorial Road Race, in the north of the Island yesterday.

The junior Manx Road Club rider finished ten seconds ahead of Graeme Hatcher and eleven ahead of Marty Warren, both of the Manx Viking Wheelers.

That was a third consecutive third place finish for Warren in the series, who tops the overall standings on 180 points, 20 ahead of Hatcher.

The B race was won by Andrew Howland of the Manx Mountain Bike Club, with two more Wheelers, Gary Hinds and Gary Mazzone, coming second and third respectively.