Klaffy and Sayle do the sidecar double 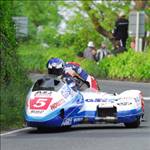 Klaus Klaffenbock and Daniel Sayle are celebrating a magnificent sidecar double at TT 2010 after claiming the second race in incredible circumstances.

They started the final lap ten seconds behind John Holden and Andrew Winkle, had closed that to 6.4 seconds by Ramsey Hairpin, then ate up the remainder over the mountain section to take the race by the narrowest of margins.

Conrad Harrison and Kerry Williams were third, some way behind Holden and Winkle.

There were a couple of notable retirements.

Dave Molyneux and Patrick Farrance went out at Cronk-y-Voddy on the first lap, while Tim Reeves and Dipash Chauan called it quits at Glen Helen on lap two.