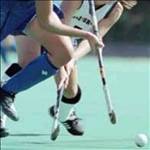 Bacchas A fell at the last hurdle in their attempt to complete their mixed premier league season with ten straight wins.

In their final match, they drew 3-3 with second placed Valkyrs, but the dropped points scarcely mattered, at they had already secured the title last weekend.

On the other side of the coin, Bacchas' third goal preserved their unbeaten record for the campaign, and came in the very last minute of the league season.

The highest scorers of the day were Falcons, who are still in a strong position to finish the season as runners up. They thrashed bottom of the table Ramsey A 8-1, which included a hat-trick from Kim Carney and goals from Gerry Quinn, Christian Davis and Dave Millward. James Atchinson replied for Ramsey, who are already relegated with ten straight defeats.

In the other game in the mixed premier league, Jo Quine and Alex Atkinson scored to give Bacchas B a narrow 2-1 win against Valkyrs B.

The two teams in contention for the mixed division one title, Celts and Saxons, both won to keep up the challenge for honours. Leaders Celts stayed six points ahead of their rivals, but Saxons have a chance to close the gap when the sides meet. Celts put seven past bottom of the table Ramsey Ravens, without reply, and Saxons won 3-1 in a tougher fixture against Harlequins A, who narrowly lost third place, on goal difference, to Cammags.

Mixed division two champions Kestrals replicated Bacchas' performance in the premier league, drawing their final match of the season, when a win would have given them a 100 per cent record for the campaign. Like Bacchas, they had already secured the title.