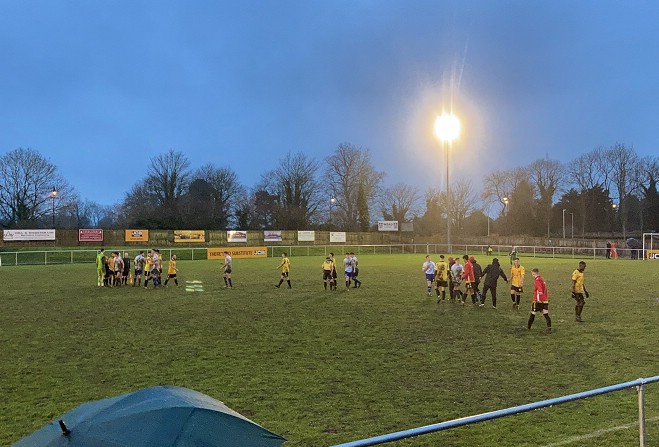 A late penalty denied 10-man FC Isle of Man victory this afternoon (11 December) as they had to settle for a 2-2 draw against Rocester in Staffordshire.

Sean Doyle had the Ravens in front on nine minutes, heading home from a curling cross from Ste Whitley.

However, the hosts then levelled with just over 30 minutes played as Rocester were on the end of a free-kick.

But just moments later, the Manx side were back in front as Doyle bagged his second with his left-footed effort flicking up past the dive of Rocester goalkeeper Charlie Wood.

After going into the break 2-1 in front, FC Isle of Man and their Staffordshire hosts played out a cagey second 45 as pitch conditions continued to worsen.

The job of holding onto the lead was them made all the harder for the Island team with around 20 minutes remaining.

Sean Quaye received a red card following a tussle between players during an incident near the touchline.

Despite holding firm, FC IoM's resilience was undone with just five minutes or so to play.

After claims of handball, Rocester were awarded a penalty which was calmly slotted home past Dean Kearns.

Despite only coming away with one point, it means the Ravens have extended their unbeaten league run to eight games.

Their next fixture will be at The Bowl next Saturday (18 December) against Sandbach United, kicking-off at 5.30pm.