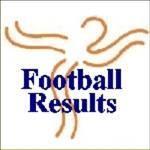 Peel stay top after winning their final game of the campaign 2-1 at home to St. Mary's - they survived some scares in the second half.

St. George's have two games remaining - away to Gymns and at home to Old Boys - and need to win them both to take the top prize for the fifth time in six years.

At the bottom, Colby are down after losing 4-2 to already relegated Ayre. Any other result would have seen Corinthians drop in Division Two.

Marown caused an upset in the Paul Henry Gold Cup when they beat St. John's 5-4 on penalties after the sides drew 1-1.

And the ugly side of Manx Football surfaced once again when Castletown beat Pulrose 3-1. Pully keeper Andy Glover was sent-off against Castletown for the second time this season - he was involved in a violent incident with Alex Crawley.

On Sunday, St. George's player Neil Brogan was sent-off for punching his own team-mate Alex Harrison in a 3-2 Hospital Cup Quarter-Final win over St. Mary's.

Manx Radio awaits word from the Isle of Man Football Association on any punishments.