Laura becomes Queen of Tennis on the Island 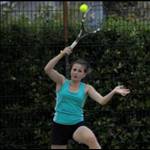 The PokerStars Island Tennis Championships concluded over the weekend and a new star was born as 15-year-old Laura Feely swept all before her on the way to winning the women's title.

After fighting her way through to the the semi-final, Laura faced the daunting task of playing the 16-time champion and number one seed Karen Faragher.

However, Laura played a solid game and won in straight sets 6/4, 6/2, which set up a final with previous finalist and number three seed Katie Tinkler yesterday.

The first set went to Katie who made her experience tell, taking it 6/3, but Laura fought back taking a 4-0 lead in the second set and going on to win 6/3.

In the final set Laura was able to maintain the momentum she established in the second and went on to take it 6/4.

The men’s singles competition was a much simpler affair for eventual winner James Buxton.

He had a straightforward run to the final where he beat number two seed Ryan Chinn 6/1, 6/1.

In the ladies' doubles final the number one seeds Karen Faragher and Lucy Hamilton-Turner took on the number two seeds Laura Gardner and Katie Tinkler.

This ended up being a very tight match with the first set going to a tie-break, which was eventually won by Karen and Lucy 7/4.

In the second set Karen and Lucy pulled out an early lead, breaking in the first game, but Laura and Katie pulled the set back to five games all before Karen & Lucy took the next 2 games to win the set 7/5 and with it the title.

This match was similarly tight to the ladies' doubles final with James and William winning in two sets 7/5, 7/5.

In the mixed doubles final Laura Feely and Marc Chinn, who had knocked out number one seeds Karen Faragher and James Buxton in the semis, took on Kerry Beattie and Ian Watson, who's the Island's Tennis Development Manager and Laura and Marc’s coach.

But the younger pair showed no fear, winning the match 6/4, 6/2 to complete a great week of tennis for Laura as she took her second title.

Their win also bodes well for the future of tennis on the Island as Marc is just 16.