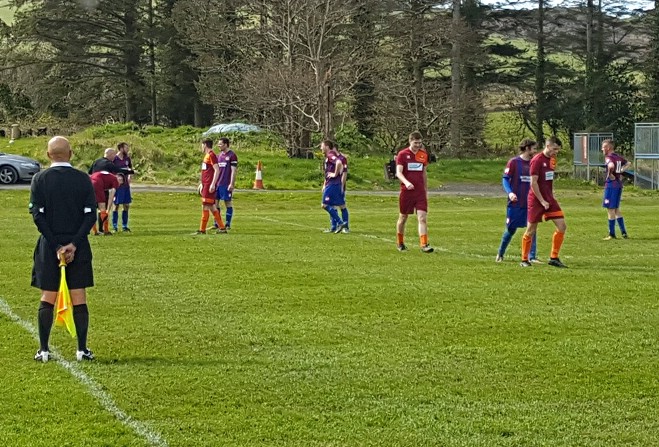 Away from the Hospital Cup, there were a number of league matches in the Canada Life Premier League and JCK Division Two today.

St Mary's beat Laxey 4-3, thanks to goals from Ste Priestnal (two), Jordan Cooper and Connor Birch, who struck from well inside his own half.

Braddan put in a good performance against St John's, drawing 4-4 and picking up a vital point as they aim to escape relegation.

Andy Glover, Stu Pacey, Joe Andrews and Connor Dempsey were on target for the home side.

Peel and Old Boys also drew, with the match ending 2-2 at Douglas Road.

Shaun Kelly and Daniel Bell were on target for Peel, with Robbie Ward and Ian Ramsey hitting Old Boys' replies.

In JCK Division Two, meanwhile, Marown secured a vital victory against Foxdale, as they play their games in hand and continue to try and climb towards the top of the table.

They won 4-1 at home, thanks to goals from Sean Shimmin, Ashley Higginbotham and a brace from Matthew McQuarrie, one of which was a penalty.

Their loss enabled Castletown to open up an eight-point lead at the top.

Pulrose beat Onchan 5-2 at home, leapfrogging their opponents into third place in the process.

A Marc Priestnal brace, strikes from Jack Townsend and Barry England and an own goal did the damage for them.

They're a point behind second-placed Foxdale now, but have played one more game than them.

That was Malew's last league match.