Lloyd all set for the brickyard 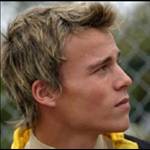 Isle of Man motor racing ace Alex Lloyd will attempt to extend his lead and equal the record for consecutive victories in the Indy Pro Series.

The latest round will be on Friday at the Indianapolis Motor Speedway, home of the world famous Indianapolis 500, which is on two days later.

Alex was quickest at the Open Test, which saw the top six cars within half a second of each other.

He thinks it's going to be a close race but feels his team should be challenging for the win.