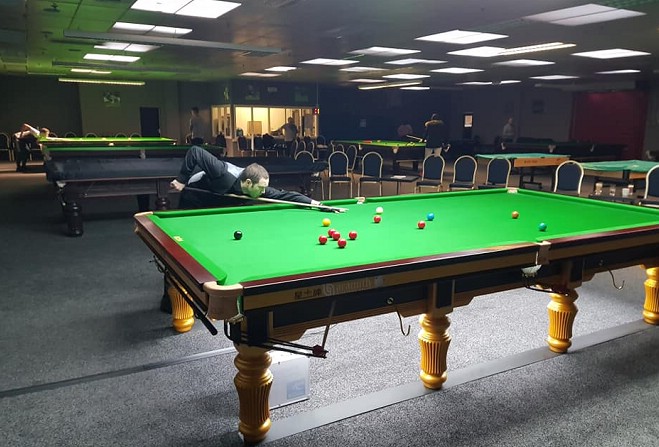 Week eight of the Macs Builders Merchants snooker league saw an upset at Malew and an overdue win for Port St Mary Legion.

The first two frames were shared, Brandon Forrester 72-55 Paul McKinstry and Scott Campion 65-82 Steve Cowin, that’s three in a row now for Cowin. A sixth win in eight for Fred Corris over Ivan McMaw 39-65 put Wannabes ahead before Sam Palmer with a 26 break won his fourth in a row, this one on the black 82-69 over James Teare. Darryl Hill’s 22 break in the decider 83-60 against Dave Corris helped seal another Blinders win.

A third league win for Cue Zone based Jacksons who won this encounter with three straight black ball wins. Lee Gale v Marek Kenny, was close throughout and a quality encounter by two in form players ultimately settled with Gale potting pink and black to win 49-43. Next up was Kam Virk and Matt Radley a very good game with some great shots but Virk edged this by once again potting pink and black to win 60-50. Graham Ashton was on the verge of pulling one back just needing the final pink, but an in off left it for Tony Dhadwal to pot pink and land perfectly on the black to win 60-47 and put Jacksons 3-0 up. David Cavanagh v Doug Kinrade was off scratch and a good game but Kinrade played very well and with plenty of small breaks he ran out a 19-67 winner. Final frame ended Nick Heaver 37-66 Ken Kinrade, a great effort from Heaver but the vast experience from Kinrade took the game for the Rockets. Thanks to Kam Virk for details.

No real nail biters in this match where the leaders were a bit under par but it was memorable for first league wins for Peel’s young recruits Tom Curphey and Barton Beaumont. Alec Oates was up against Curphey in the first and nothing seemed to go Oates’ way. As soon as he looked to make inroads into Curphey’s 35 start he'd leave an easy red on. Curphey got twitchy on match ball brown and fouled but ultimately rolled in a very tricky brown placed south of the black spot with the cueball almost angled in a black pocket. He then took a mid length blue to leave snookers required, Oates 39-65 Curphey. Eric Drinkwater and Barton Beaumont traded flukes aplenty in the next which was off scratch. With Beaumont edging ahead he took a crucial last red the full length of the table with the cueball flying a further twelve foot to rattle in the yellow bag but thankfully for him stay up. Beaumont then potted a lovely black into the middle. Frame ball was a horribly dead straight blue the full length of the table which Beaumont cooly rolled in deadweight, worried of the in off. Drinkwater made his opponent sweat as he went for snookers but eventually Beaumont sunk the pink too and the lads promptly disappeared to celebrate, Drinkwater 18-39 Beaumont. Mark Quinn was Malew’s only winner on the night, 65-30 over Geoff Hall and even he said it was one of his worst frames this season. Quinn was always ahead but just as Hall fought back a couple of lovely snookers from Quinn paid dividends, Quinn 65-30 Hall. David Quayle then caught Jim Caley in sparkling form as he raced to a comfortable 40-85 win. James Goodwin also was on the receiving end from John Kelly, the Peel man potting and cueing nicely throughout to win 35-85.

Congratulations to PSM, nine months from their last win and at the eleventh attempt they defeated last seasons champs Newbys. No big breaks but with frames 1, 3 and 5 going to the black and could have gone either way. Frame scores, Dave Pickersgill 66-60 Johnny Myers, Phil Joynes 35-62 Ste MacDonald, the latter keeping Joynes at bay with some excellent safety play and potting. Shaun Roberts 39-31 Adam Dooley and Marc Morley 40-29 Pat Maher gave the home team the long awaited result. The final frame was notable for late fightback by Newby, Zain Abideen giving a 28 point start to Terry Boyle who played well and is always the gentleman, Boyle was still 32 ahead on the colours but after two good snookers from Abideen he then potted a brilliant pink and black win 68-75. Thanks to Simon Gardner and Terry Boyle.

John Kennish reports: Matthew Dodd 85-76 Peter Kirkham. The frame started well for Kirkham with some well taken long pots but aside from a 16 break was unable to capitalise due to the balls landing slightly awkwardly. This was a recurring theme and with the “Doddster” chipping in with some good pots, he was able to keep Kirkham at arm’s length. A fortunate snooker followed by a very well-played safety shot on the brown led to a half chance for Dodds which he took with a full length pot. With the blue over the pocket Dodds made no mistake and sealed the win. There is no stopping Doddsy at present, who is yet to hit top form! Mike Doherty 91-53 Steve Finnegan, Doherty started steadily and kept the scoreboard ticking over with some excellent pots to add to his handicap head-start. This left Finnegan needing snookers to make up the deficit going into the colours. Fin rallied and using his tactical prowess was able to repeatedly put his opponent in difficulty with some skilful safety play and snookers. Ultimately though, Doc capped another impressive performance by biding his time patiently until his chance came along which he took confidently to seal the frame meaning that the gap in points was too large to bridge. Peter Collister 81-40 Dave Addinall, Collister added to his 21 start with a good 22 break and built up a lead nearing 50. Addinall was unable to get in amongst the balls with Collister playing a superb “hit and run” game.  Addinall finally managed to get in with a 20 break in the second half of the frame but a couple of uncharacteristic misses meant Collister was able to get home comfortably. A good performance from Collister who ended Addinall’s 100% record. Brian Howland 39-65 Lee Hunt, Hunt started well with a 22 break and he maintained this distance throughout most of the frame, however with a few good pots here and there, Howland had a good chance on the blue to take the remaining colours and pinch the frame. Due to the position of the pink Howland had to force the blue in and run around the table with the cue ball off three cushions. This made the blue more difficult which led to the chance being missed. Blade made no mistake with a double on the blue leaving Howland requiring a snooker on the pink, which he was unable to get. John Kennish 105-70 Steve Oates, an early 16 and 27 break enabled Kennish to get back into the running early on. With the remaining 7 reds clustered together Oates attempted safety shot went wrong which led to him opening up all the reds allowing Kennish to capitalise with a 38 break, this weeks highest to effectively put the frame out of reach.

Jamie Wilson 84-63 Nikki Young was a bit of a cagey affair, Wilson missing several colours after good reds and Young also potting well and keeping Wilson on a tight leash with some clever safety play. It took Wilson up to the colours to finally catch up the start and with a slender lead he potted the last few colours to gain the victory. Stu Littlewood 65-52 Dollin Mercer, Mercer had the best of the early exchanges and caught up the 21 start fairly quickly. A 3 ball plant in the middle of some congested reds with 2 of the reds going in sparked Stu into life and he made the most of the reds splitting by compiling a 26 break and slightly unlucky to go in off brown or the break could have been better. A bit more cat and mouse followed before Littlewood potted what he thought must have been the winning green leaving Mercer with a snooker required. However, Mercer laid a couple of snookers on the brown finally forcing an error. He then potted brown, blue and pink to make it a black ball frame. Both players had a go at a couple of blacks, but eventually Mercer left a safety shot near to the middle bag which Stu clipped in to extend his unbeaten run to eight, the last four all on the black. Paul Smith 97-74 Rhys Moore, with Smith giving a 70 start it was vital to pot some early reds with high colours, however he managed to miss 2 or 3 early high value colours with black consequently going safe. Plan B was to revert to safety and force the errors from Moore and apart from two excellent long range reds from Rhys this seemed to do the trick with Smith slowly closing the gap by finally potting some of the high value colours. A series of snookers also helped rack up the points for Smith and left him needing just the blue to win. However this proved more difficult than it should have been and he missed a couple of easy chances before eventually falling over the line. Smith needs to be better in his Champion of Champions semi-final date with John Kennish at the weekend. Chris Dagnall 101-63 Paul Tangeman, Dagsy didn’t really give the in form Tangeman a chance to get out of first gear, a break of 34 ensuring the handicap was reduced very quickly. A series of fouls didn’t help Tangeman’s cause either, gifting Dagsy some welcome free points. In the end a comfortable win for Dagsy who has also recently hit a rich vein of form. Gary Conwell 58-83 Brendan Clague, the out of form Conwell chasing 42 from the start missed a series of easy balls with Clague making some good pots to reduce the red count. Eventually Conwell got going and in typical ‘grinder’ fashion to take it to the colours. A clearance from green looked possible for Conwell, unfortunately the white ball came to rest on the side cushion making the brown an extremely difficult pot. With the brown missed Clague took it but left an impossible cut into the middle pocket for the blue. Well we thought it was impossible, but somehow with the slightest of contacts and barely enough pace to make the pocket the blue disappeared. An excellent pink from Clague sealed the game. Thanks to Paul Smith.

A third defeat in a row for the leaders Malew who have 26 points but I'm sure they'd have taken being top by two points after eight games at the start of the season. Hurricanes move into second on 24 and Musicians third on 23. St Olaves A had a bye this week and drop to fourth. Next week the top two teams will be battling it out on adjacent tables at The Cue Zone as Reprobates and Mob entertain Malew and Hurricanes respectively. Stu Littlewood stays top of the individual league, unbeaten on 8 wins, Jamie Wilson and Mark Quinn are both on 7. Dave Addinall heads the breaks league on 25.5 points from John Kennish on 20.5 and Sean Corkish on 11.