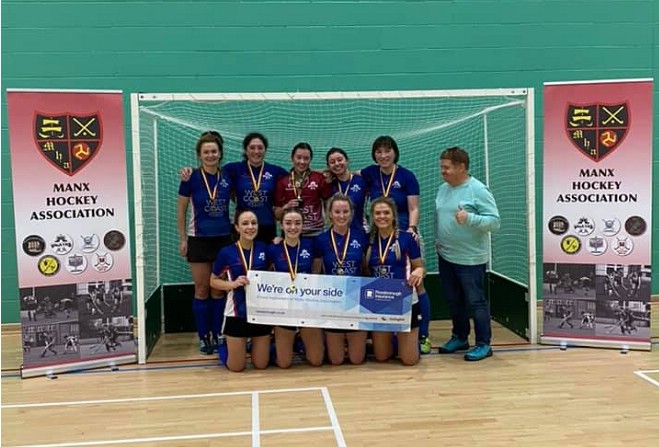 Vikings vs Valkyrs goes down to penalty flicks

A great turnout and some lovely hockey played made the first Manx Hockey Association's Indoor finals day a huge success with four different clubs winning each of the finals that took place.

Bacchas vs Vikings A close match is always on the cards when these two teams meet and we sure were kept on the edge of our seats during this first match of the day, some excellent play from both sides and bacchas starting off strong with the prolific goal scorer Andy Whiting in their lineup causing trouble for the Vikings defence. However some well taken chances from the up and coming Caley twins saw Vikings take the win.

Castletown vs Saracens This was always going to be an interesting final as both sides are strong and could easily deny the other of a win. Saracens youth and determination was always going to be a threat against the experienced Castletown Squad.
The game started very end to end with Saracens slotting home a early goals to make the final interesting. However the experienced trio of Hannah Leece, Dani Kelly and Stevie Ronan ultimately proved too much for the young Saracens side and finished on the winning side of a 12-3 final.

Vikings vs Valkyrs: The most nail biting final of the day! Naturally with the career vikings ladies have, Going into this final Vikings were favourites however Valkyrs were very much out to take the title from their East coast rivals. The match started very end to end with both goal keepers being kept very busy, and the first goal took a while to come, but in true Vikings form, Kim Carney made sure the blacks meant business. Some excellent play from Valkyrs Imogen manning and upcoming superstar Sienna Dunn, meant for the westerners the equaliser goal wasn’t far behind. Dunn then followed up with another well taken goal to put the blues ahead going into the second half. Vikings very much on the back foot then saw them conceding two goals in quick succession and Vikings title hopes were hanging in the balance. 4-1 down going into the final quarter, the blacks were keen to make a comeback via a good run from Louise Slater down the wing who slipped the ball to Kim Carney who calmly slotted it home. 4-2 to Valkyrs. Carney’s ever present younger sister Zoe showed the crowd what she was made of by weaving her way through the Valkyrs defence to bring the score to 4-3.
Jess loader then pulled off one hell of a reverse flick just past Vikings’ Blae Cain to extend the blues lead to 5-3..
Short corner after short corner followed and the blacks couldn’t find the backboard thanks to some excellent saves from goalkeeper Ava Treutler. However the blacks short corner dry spell soon broke through Steph Foxton who took a good deflection to find the back of the net. 5-4..
With goalscoring glory still pulsing through her, foxton put another away through a great run from the back to bring the game to 5-5. Nail biting.
The game went to flicks in the end with 3 players from each team taking it in turns to take their penalty flicks against the goal keepers who had already had the game of their lives. This was even closer again with Valkyrs coming away with the win 1-0 over the previous title holders.

Bacchas vs Valkyrs The top two mens sides; Ramsey Crookall Bacchanalians and West Coast Fitness Valkyrs in the Rossborough Men’s Indoor went toe to toe in the final game of the day. A nervy opening saw both teams size each other up until late in the first quarter, Bacchas Jonny Callow took advantage of some loose defending to square to an unmarked Andy Whiting on the backpost who made no mistake in finding the net. 1 became 2 quickly with a swift counter attack being finished off neatly by the whites.

Valkyrs played to their strengths in the second quarter and found themselves back in it when tidy work down the right hand side by Luis Novo Smith found captain Ciaran Gell alone to bring the score back to 2-1 before halftime.
The 3rd quarter saw Bacchas race out the blocks with 3 unanswered goals inside 5 minutes only to be pegged back again by Novo Smith twice.
The final quarter of a superbly supported finals day showed the extra subs that Bacchas had mattered. Although they went down to 3 players for a part of the quarter, they were still able to find 3 more goals to put a convincing touch to the score line of 8-3.

A brilliant day was had thanks to the efforts of the MHA committee and special thanks to our sponsors Rossborough Insurance for their continued support and our Volunteering umpires without which such events would not be possible.