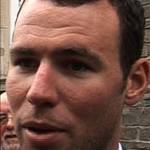 The Manx Missile Mark Cavendish has announced his engagement.

He proposed to girlfriend Peta Todd in front of their infant daughter Delilah Grace on the second anniversary of them meeting at a charity event in California.

A London wedding in October next year looks likely, although the venue is yet to be decided, as Cavendish explained.

‘A lot of my friends are based in Europe because they’re pro cyclists and my family are on the Isle of Man. And Peta’s are in the London and Essex area.

‘We were toying with the idea of getting married in St Paul’s Cathedral,’ he added. ‘I’m allowed to because I was awarded an MBE last year, but it’s fully booked. It would have been nice, but it’s not the be all and end all.’